On New Year’s Day 1814, the British Foreign Secretary, Lord Castlereagh, set sail from Harwich for Holland with a challenging brief: to build a coalition with Russia, Prussia, Austria, and Sweden to finally bring an end to the French Empire of Napoleon Bonaparte after more than twenty years of continuous warfare in Europe.

Castlereagh had agreed a strategy for negotiations with the Cabinet and the Prime Minister, Lord Liverpool. But from the moment he left Number 10, British foreign policy was effectively in his hands. As Europe was still in the grip of heavy fighting, and Castlereagh and the other negotiators moved to keep pace with the frontline, letters to and from London could take four to six weeks to arrive and were often written in code in case they were stolen by foreign spies. 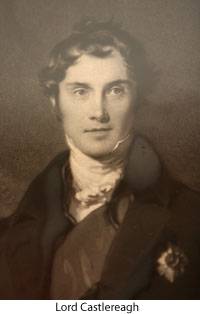 When his conduct at the 1814 Congress of Vienna was later challenged in Parliament, Castlereagh made it quite clear where responsibility for Britain’s role lay. ‘I did not wait for instructions at Vienna’, he said, ‘I took upon myself the responsibility of acting; and if the interests and honour of England have been sacrificed, I stand here alone responsible.’

Some of the most famous British Prime Ministers – such as Viscount Palmerston, the Marquess of Salisbury, and Winston Churchill – have made their names and their reputations in the field of foreign affairs. But not all have been so active in this sphere, with some of the most successful relying instead on strong and loyal lieutenants in the Foreign Office.

Britain’s longest serving nineteenth century Prime Minister, Lord Liverpool, was often overshadowed on the international stage by his Foreign Secretaries: Castlereagh, from 1812 to 1822, and George Canning, from 1822 to 1827. Likewise, Clement Attlee, voted by academics as the greatest twentieth century Prime Minister in a 2004 MORI poll, largely left the conduct of foreign affairs to his Foreign Secretary, the trade union leader Ernest Bevin, from 1945-51.

Both Liverpool and Attlee excelled in managing Cabinets full of big and difficult personalities. It is also no coincidence that both presided over the end of lengthy wars and the sensitive negotiations that followed. Consumed by problems at home, part of their achievement was to trust the management of foreign policy to those better equipped for the diplomatic arts.

Castlereagh’s contribution to the 1814 Treaty of Vienna has been hailed as one of the greatest negotiations in the history of British diplomacy. The Treaty established a system of ‘Congress diplomacy’, by which disagreements between the great European states were to be resolved through frequent meetings. Bevin, who had the unenviable role of following Churchill as the guarantor of Britain’s interests when meeting the victorious allies in 1945, played a critical role in the formation of NATO and in making Britain a nuclear-armed power, giving it a clout in international affairs which belied its much weakened position.

Not that the going was always smooth between these Foreign Secretaries and their Prime Ministers. Castlereagh’s diplomatic tour of Europe between 1814-15 took him to the Hague, through Germany, into Switzerland, then Paris (twice), and Vienna, meaning he was absent for long periods while the government faced severe scrutiny at home. While Liverpool trusted his foreign secretary, he did not always approve of his actions and sent numerous nagging letters asking him to return and explain himself.

Much to Liverpool’s horror, Castlereagh almost committed Britain to another war late in 1814, this time with Russia, by opposing the Tsar’s attempts to annex Poland and give Russia a foothold in central Europe. Castlereagh believed that to appease the Tsar risked creating another Napoleon, but Liverpool was horrified by his renegade behaviour. ‘I am inclined to think that the less we have to do with it … the better,’ scolded Liverpool, but Castlereagh pushed ahead regardless and felt vindicated when the Tsar backed down.

Liverpool warned Castlereagh that public opinion in Britain favoured harsh terms being imposed on defeated France, and that he would come under severe criticism from the commercial classes if he gave up any of the colonial possessions that Britain had seized during the war. In a reply on 17 August 1814, Castlereagh made his famous statement that, ‘it is not our business to collect trophies, but to try … [to] bring back the world to peaceful habits.’

By the time Attlee became Prime Minister in 1945, the advantages of air travel meant that he was more likely to personally represent the nation on the international stage, despite the perceived failure of Neville Chamberlain’s shuttle diplomacy of the 1930s. The personality of the leader was now more important than ever. Attlee, a small and bird-like man, lacked the personal gravitas of his great predecessor Churchill. The diplomat and MP Sir Harold Nicholson described how he wilted alongside the assembled titans of world politics: ‘How different from Lloyd George and Balfour, how terribly different from Winston!’

By contrast, Bevin, larger than life and sometimes characterised as the ‘working-class John Bull’, was the perfect foil for the Prime Minister and they developed one of the strongest working relationships in British political history.

Bevin’s patriotic but realist estimation of where Britain stood in the world – fully shared by the Prime Minister – was based on two facts: the reality of American power after the Second World War; and the prospect of Soviet aggression in eastern and central Europe. Safe in the knowledge of Attlee’s support, Bevin acted out his foreign policy in a hard-headed and unsentimental way, often in the face of opposition from the Labour rank and file and dismissive jibes from Churchill on the opposition benches.

This involved an assertive and tough stance with the Soviet Union – in Bevin’s view, Churchill had not been tough enough – and an emphasis on close relations with the United States, steering it away from a return to 1930s isolationism and towards the formation of NATO. Most controversially, Attlee and Bevin agreed that development of a British atom bomb was crucial to the projection of British power on the world stage, and subverted the normal process of Cabinet government to make it happen. To avoid a showdown with Labour ministers who opposed the bomb, such as Stafford Cripps and Hugh Dalton, they formed a secret committee to push the plan through. In Bevin’s memorable phrase, Britain not only needed the bomb, but ‘we’ve got to have the bloody Union Jack flying on top of it’.

So what lay behind a good working relationship between a Prime Minister and Foreign Secretary?

Firstly, a shared vision for what the end game should be, even if unanimity was lacking on the means to achieve it. Secondly, both these cases show that burden-sharing and a sense of collegiality was crucial. In 1822, after the more fractious George Canning replaced Castlereagh as Foreign Secretary, Lord Liverpool would complain how ‘Lord Castlereagh used to do everything he could to smooth difficulties and make things easier for me, but if there is a pamphlet or a passage of a newspaper that Canning thinks he has reason to complain of, he comes to me about it: he works me with a 20-horse power.’

Better still perhaps for a Prime Minister is to have a Foreign Secretary who fights for your interests fiercely abroad, but is also able answer at home. ‘If you’ve got a good dog’, Attlee said of Bevin, ‘you don’t bark yourself.’

Copyright John Bew. This article was produced as part of the No10 Guest Historian series, coordinated by History & Policy.